3D Animation for Kids – Behind the Scenes 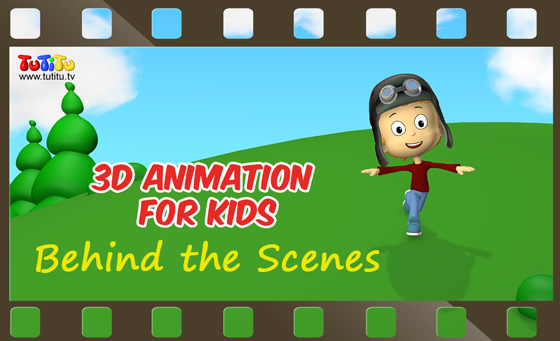 Some video content creators need nothing more than a webcam. TuTiTu’s 3D-animation videos for kids, however, are a different story. Each of our videos is a result of a group of professionals working together, focused on a single mission: to bring our little fans the best educational videos for kids we can possibly make.

Wondering how we do it?

Join us for a peek behind the curtain! Follow the making of TuTiTu’s airplane song from A to Z, and meet the Tu-Ti-Team. Ready? Here we go!

It Starts with a Song

The first step towards creating a new sing-along song for kids is writing, composing and recording the song itself. While many content-creators focus on well-known nursery rhymes, TuTiTu prides itself on providing viewers with original sing-along songs for kids.

“We try to keep the songs simple, fun, and easy to learn new words with, just like the toy videos they were made to complement”, says Yossi, TuTiTu show co-creator.

Once the song is completed, the animators step in. The Tu-Ti-Team of animators start by listening to the song and brainstorming ideas, effectively writing a screenplay for the video.

Once they agree on a story, they make a storyboard to test it out. Each frame of the video is represented by a rough sketch, and frames are assembled in video format to make sure the pictures match the timing of the song.

Next, the team creates the three-dimensional objects that will appear in the video. “It’s a lot like sculpting”, says Tal, TuTiTu co-creator and chief modeler. “We create the 3D models from scratch, manipulating the properties of the 3D object until it is exactly as we’d like it to be”.

When the 3D models are ready, the animators add what they call “textures”. Adding textures is a lot like “dressing up” the characters, or “decorating” the objects. Textures are everything that’s on the surface of the 3D object, including colors, facial features, etc.

“Next, we place the objects and the cameras in the three dimensional space where the story will take place”, explains Shira, one of the young animators on the Tu-Ti-Team. “It’s a lot like shooting a regular film, since we have to decide where each camera and lighting fixture will be placed, as if we’re actually filming on location.”

The final step of the animation is what the animators themselves refer to as “animation”. This is where movement is added to all those inanimate objects and the magic really kicks in.

The animators design a “rig” for each character or object, which functions as a sort of skeleton, enabling them to control movements. Then, they manipulate those movements and refine them to make them look as natural as possible.

And here is what it looks like when all that work is done. Totally worth it if you ask me 😉

Questions? Requests? We’d love to hear what you think!