How to Teach Toddlers the Four Elements with TuTiTu 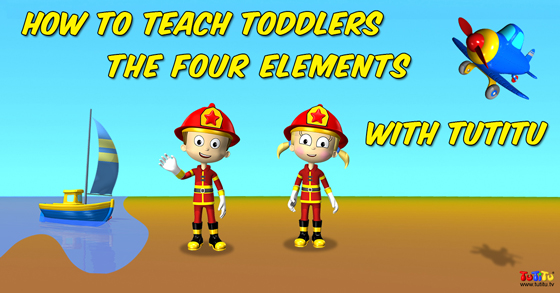 There are many different ways to learn about the world around us. Different attempts have been made throughout history to understand the natural world and to categorize its parts. Some were more scientific while others were more mystic.

One of the most famous philosophical concepts about the world is the idea of the four classical elements: earth, air, fire and water. This division describes the four fundamental powers in the world and it is therefore quite popular – different variations of it appear on various philosophies and religions around the world, from Ancient Greece to the Far East.

Whether you believe there’s a higher meaning to these elements or not, it’s another nice way to teach your kids about the world around us… And TuTiTu wants to help! Here are four ways to learn about the basic elements with TuTiTu’s 3D videos for kids.

In TuTiTu’s aquatic toys special you can see the lovable red hovercraft assemble various toys relating to the sea, such as a boat, a submarine and more. You can watch it with your toddlers and while you’re at it, teach them about the sea. For instance, what’s the difference between a jet ski and a regular motorcycle? And how does a boat keep from sinking?

You can teach your child new vocabulary with sea words such as “float” VS “sink”. The submarine, too, is an interesting vehicle to get to know with your child. Its purpose is to remain underwater, and from inside it you can see clearly the underwater world. Can your toddler name things that you can find under the sea?

To complement the video watching you can… run experiments in the tub during bathtime. Which toys float and which sink? Which make a bigger splash than others when you drop them in the water? And how do you make waves that continue all the way to the other end of the bathtub?

Did you know that TuTiTu can help you learn about aircrafts too? In our special aviation playlist you can watch 3D videos about the airplane, helicopter and even the zeppelin. You and your toddler can watch TuTiTu build these toy models out of their components and talk about your own experiences.

Has your child ever been on a plane? What was it like? And can you try to work out together the differences between the different flying instruments? You can also watch our helicopter and airplane songs to get more inspiration and learn new words.

To complement the video watching you can… build your own aircraft out of paper or, if the child is old enough, get a real DIY set. Fold and decorate your paper airplanes and let time fly as you play with them!

TuTiTu’s latest surprise is a new series of animal videos for kids, in which you can learn all about the zebra, the turtle, the camel and many more. Each episode has two parts – first TuTiTu builds each animal (just like the Toys series) and then the animal sings a song and introduces itself to the viewers (just like the Song series).

The videos combine different kinds of learning and they are the perfect way to get to know different forms of life on this planet and learn about their characteristics and environments. Watch the videos with your children and point out to them the differences in backgrounds: which animal lives where? What’s the difference between residing in the desert and in the forest?

To complement the video watching you can… take a walk in the neighborhood park (or even a nature reserve if you live near one!) and notice together what kind of soil and plants it has. Look up which trees are common in your area of the world and what makes them special.

Of all the elements, fire might be the most interesting one but in day-to-day life it’s also the most dangerous one. You can discuss with your child the many uses of fire – we cook with it, it can help us keep warm, it provides light and you can even create special art with it.

However, it can also be very unsafe if you don’t use it properly and make sure to take the right precautions (such as stepping away when mommy and daddy use it.) But not to worry – in an emergency, the fire brigade are here to help. Watch the Fire Truck Song together and what fireman and firewomen do and their vocabulary.

To complement the video watching you can… run special fire experiments with your child, such as this one. Learning about fire is important – it’s true that it can be very dangerous, but it can also be handy later in life!

Do you use TuTiTu’s videos to teach your children about nature? Have any tips and ideas for us?

Let us know in the comments and please SHARE this article with your friends!