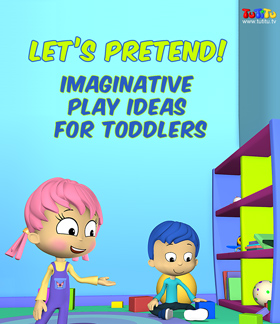 Imagination is an important part of human development. Children seem to know this intuitively, and love playing “make believe” games- whether they are pretending to be rulers of a magical land made entirely out of candy, or performing mundane tasks like “cleaning” while playing “house”.

A growing body of research suggests that these “pretend games” are not only super-fun, but also have significant developmental benefits. Among other advantages, imaginative role-playing has been found to foster cognitive skills, encourage creativity, enhance language acquisition, and teach important social skills like empathy, self-regulation and problem solving.

Are you ready to dive into the world of endless possibilities with your child? Here are some imaginative play ideas for toddlers, and the TuTiTu sing-along songs for kids to go along!

Yossi, TuTiTu show co-creator, says our telephone sing-along song was inspired by his own children’s favorite “pretend” game. “Kids see us adults constantly speaking on the telephone”, he says, “and it’s only natural for them to want to join in and take part in this everyday activity”.

Toy-phones are wonderful toys for kids to practice communication and language skills. Try talking to the toddler with a real telephone in hand and have them listen with their own “phone”- feeling like an equal is going to make them proud and happy.

Yossi’s recommendation? “Try ringing the toy-phone when you need to give your child instructions, or get them to do a chore around the house. You’ll be surprised how willing they are to listen to what you have to say when the conversation is in itself a game”!

I Am An Adult, Hear Me Roar

Pretending to be a grown-up is a classic in children’s games, as kids try to understand the world they live in and prepare for successful adulthood. So, let’s go to the kitchen and play an imaginative game of food-preparation with the toddler!

For safety reasons, this will obviously be easier if you prepare a super simple recipe that won’t involve knives, or fire. Something similar to the frozen treats found on our “Kids Love Snacks” Pinterest board will do just fine.

The most important thing about this game is that the child is not helping YOU out in the kitchen, you’re helping THEM! Give them a sense of power by declaring they are in charge of snack-time, gently direct them in performing simple tasks like putting trays in the fridge, and last but not least – allow yourself to be fed/served by the toddler. This funny role-switch makes toddlers feel empowered and happy, and so what if the kitchen is a little messy!

Another favorite type of pretend games is the personification of objects. Teaching kids about the concept of time? Introduce MR.Clock!

Trying to minimize the number of toys you take when packing for a vacation? Pretend toys are fighting over the one open spot in your bag, and model good-behavior by having the toys reach a peaceful agreement. Reluctant eater? Pretend the food is speaking to the child, begging to be eaten. Boredom alert? Pretend building blocks are speaking to each other and arguing about what they should be building next.

Have fun playing and remember – the only limit is your imagination!