The Science of Children Learning Language 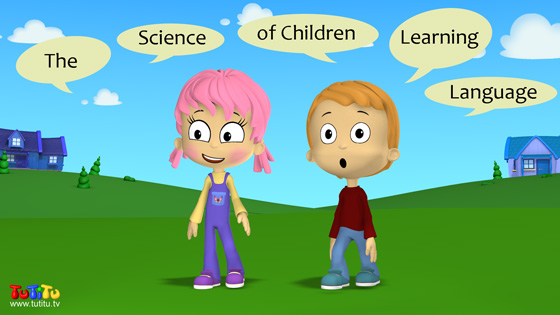 Consider the work of a scientist. Whether her field is psychology, chemistry or physics, every scientist is basically doing the same thing: looking at the world and discerning the patterns governing it. Now, consider what a toddler is doing every single day: playing ‘make-believe’, exploring objects (also known as “can I eat that?”), and testing the boundaries of acceptable behavior. Surprisingly similar, isn’t it?

Even before they can walk or talk, babies are actively seeking out information about their environments. When the time comes to learn how to speak, it is amazing to witness children’s natural ability to learn without intentional instruction. How do they do it? By conducting language ‘experiments’, forming ‘conclusions’ and making ‘predictions’.

If you’re parenting a toddler, it is useful to understand what scientists have found when looking at children’s language learning. As an added bonus, some of these are pretty simple, and you can easily try them at home and see the effects described for yourself!

What is a Wug?

By age two, most kids begin producing words. But toddlers are not simply imitating the words they hear. Renowned psycholinguist Jean Berko Gleason demonstrated this in a famous 1958 experiment known as ‘The Wug Test’.

If you don’t know what a ‘wug’ is, fret not. This imaginary creature was specifically created to examine whether young children can apply linguistic rules to unfamiliar words. The experiment went like this: children were presented with the picture of an imaginary creature they were told is called a ‘wug’. Then, the researcher presented a picture of two creatures, and said: “Now there are two of them. There are two…?”

Most kindergartners were able to respond with ‘wugs’, thus proving they can apply the plural form in English even to words they had never encountered before. The ‘wug’ test showed children learn the unspoken rules of language all by themselves.

How can parents help children learn language? By talking to kids and answering questions, enjoying nursery rhymes and sing-along songs, reading children’s books, and watching videos for kids together. Make sure your little “scientists” have plenty of words to experiment with, and share stories of their learning journey in the comments!

The “fis phenomenon” was first described by Berko Gleason and her mentor Roger Brown in 1960. In the incident these scientists described, a child referred to his toy fish as a ‘fis’. When the child was asked by an adult “is this your fish?” he answered “yes, this is my fis”. However, when the adult asked “is this your fis?” imitating the child’s flawed pronunciation, the child angrily replied: “No! This is my fis!”

This interaction suggested that the child could tell the word he produced (‘fis’) was not the word he was aiming for (‘fish’). In other words, he knew what the right word should sound like, he just couldn’t yet control the muscles in his mouth well enough to produce the desired sound.

A more recent study by MIT scholar Deb Roy explored the patterns of emergent language in a rather unique fashion. Roy and his wife had wired their own home with dozens of cameras and microphones, and recorded their son’s language experiences throughout the first two years of his life. Millions of hours of interaction and well over 7 million words were recorded and transcribed. The data collected was then analyzed to document every time the child was exposed to each of the 500-plus words he learned by age two.

Their analysis revealed the existence of complex feedback loops, with caregivers changing their own language behaviors to create “scaffolding” that helped the child in his language acquisition process. What was amazing about this process is that it happens entirely on its own: caregivers did not intentionally change the way they use words around the baby, they did it intuitively. The bottom line for parents might just be – trust your instincts.

Familiar? Or has your toddler’s language learning experience been different?
Share your thoughts!